2017 feels like it came and went in a flash, and i would like to take a few moments to look back on the year that was.

my goals for the year:

cross at least 8 things off my 35before35 list. i didn’t get 8, but i did manage 6: seeing garth brooks in concert; publishing a piece of writing; join an adult sports league; elvis week festivities; driving the pacific coast highway; and seeing a broadway show. i don’t know that i’ll get to all 35, but i’ll cross a few more off before july.

one last look at the lighthouse. point arena, california. august 2017.

so good to see these fun friends. baltimore, maryland. september 2017.

visit somewhere new in the us. our west coast road trip took care of this, as did my visit to baltimore. i am already plotting somewhere new to visit next year!

attend at least 3 voluncheers events. i only made it to two events, but i enjoyed them both and will continue to participate as my schedule allows.

read 20 books. in the end i managed 30 books this year, with a combination of new novels, “classics” i had previously missed, autobiographies, and getting further in a few different series. my favorites from this year were exit west; beautiful ruins; sister of my heart; homegoing; the underground railroad; dept of speculation; little fires everywhere; the color purple; and another brooklyn.

send two handwritten notes a month. on average, yes, i did this, but i didn’t necessarily keep track of it. i write thank yous to everyone who donates to my st jude fundraising, and i wrote at least 20 postcards after my trip to new york, so i will call this one a win.

these two are the best. memphis, tennessee. august 2017. 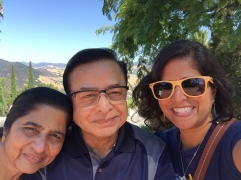 take my parents on a trip for their 40th wedding anniversary. i really wanted to take them to the uk to revisit the places they lived while they completed their fellowships, but tickets were far too expensive. instead, my parents accompanied me on my pacific coast highway road trip in august, and we had a blast. it was so much fun to have them all to myself for an entire week and to visit places that were new to all of us. i’m already trying to figure out where i can take them in 2018, so send me your suggestions! 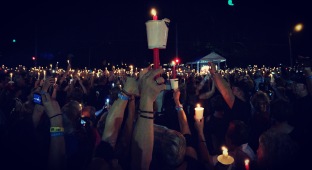 a shrine to the king. memphis, tennessee. august 2017.

attend elvis week festivities. i only made it to the candlelight vigil, but that experience was worth a thousand words. it was so fun to meet so many elvis fans from around the world and to be a part of such a meaningful event, and i definitely plan to return in the future.

run 17 miles each month. ha! this one fell apart before it was even fully put together. i came closest in the spring when the weather was nice, but i just never had the time or energy or inclination to get over the hump. i think this was a good lesson for me in biting off more than i could chew.

see hamilton on broadway. this was far and away the highlight of my year. molly and i had a blast at the show in october, and i am still raving about it today. i am already looking forward to when it comes to memphis. 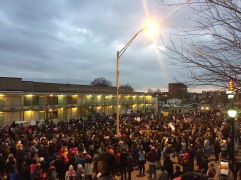 memphis marches. at the beginning of the year we had two marches in memphis, one in support of women and one in support of refugees, and i was able to make it for both. it was an incredible experience to walk alongside so many people who have similar values, but i hope for the day when such marches are no longer needed. 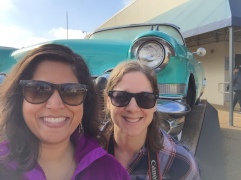 cindy and i found a new set of wheels. memphis, tennessee. february 2017.

cindy came to visit. cindy graced memphis with her presence for 9 days in early february, and we did all the things: the civil rights museum, graceland, gus’s, central, the arcade, blues city, the river, overton park…you name it, chances are we did it. or else she did it while i was at work.

garth brooks. i know this is mentioned above, but seeing garth live was a once-in-a-lifetime experience, and it was awesome.

wrote some articles for the ilovememphis blog. in addition to the piece about the artery, i also had the opportunity to write about the awesome season the redbirds had as well as my experience at the graceland candlelight vigil. here’s hoping for more opportunities in 2018.

little-big brother tot got married. our boy tot got married over memorial day weekend, and i was able to make it down to houston to celebrate with all the guys. it was great to see everyone and catch up a bit, and it was wonderful to see tot so happy.

i survived my first bridge builders summer conference. june and july were crazy, but i loved nearly every moment of those two months. summer conference was so much fun, and i can’t wait to do it again.

finally seeing the bixby creek bridge in person. it was one of the main reasons i wanted to drive the pch, and it was even more glorious in person.

a fun-filled week in new york. the highlight of the trip – and of the year, really – was seeing hamilton, but it was also great to catch up with friends and explore some new corners of the city.

i am working on my goals for 2018 [that feels crazy to type!] and will have that post up soon. i’m excited to see what this next year has in store!