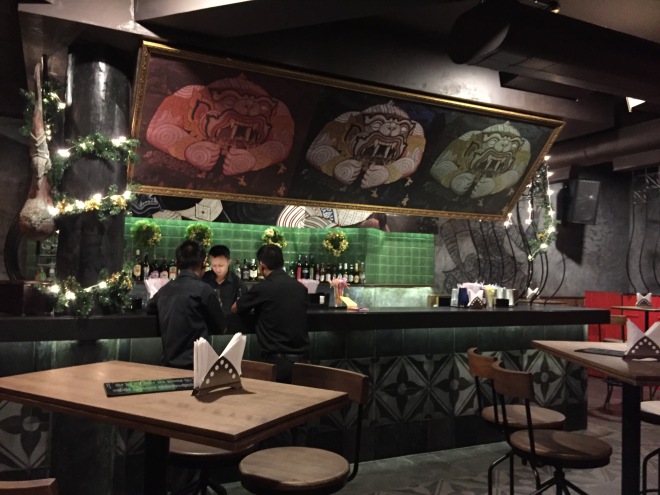 just before i left for christmas cindy and i grabbed lunch at one night in bangkok. i had been hearing good things about it for a few months, so since we were in the area we decided to check it out.

we were quite early, arriving almost exactly at noon on a friday afternoon. indians tend to eat a bit later, so it was completely empty when we walked in. it worked out well for us, however, because our first table had a strong draft and we were able to quickly move to a new one. as an added bonus we had everyone’s attention focused on us, so we wanted for nothing.

as we settled in with our drinks, we asked our server for his starter recommendations. at his urging we chose the spicy thai prawns, which were delicious. my only complaint is that there were only five of them, and both of us wanted more.

one night in bangkok has a number of daily specials, so cindy ordered the mussels in coconut milk. i wish i had gotten a picture of her mussels, because their shells were a gorgeous turquoise colour, but i wasn’t fast enough. she said they were good, although a little heavy on the coconut and low on the spice. i took her word for it, not being a huge fan of mussels myself.

my main course selection was a bangkok bowl with pork, which was fantastic. the only downside was that it looked like it kept multiplying, so even though i felt like i had eaten a lot, it didn’t look as though i made much progress. the leftovers definitely got sent home with cindy to serve as her dinner for the night. but i would order it again in a heartbeat.

landmark: next to hangover and the humming tree.

our bill: it’s been a month. i honestly have no idea.

fun facts: very eclectic interior, with influences from all over southeast asia.

to keep in mind: with its location on 12th main, it gets pretty crowded on the weekends. there is also a small area for a live band, so check ahead to see if there is a performance if you plan on visiting.

will i go back? yeah, probably. the food was really good, and it would probably be a nice lazy lunch spot on the weekend.

2 thoughts on “bangalore eats: one night in bangkok.”