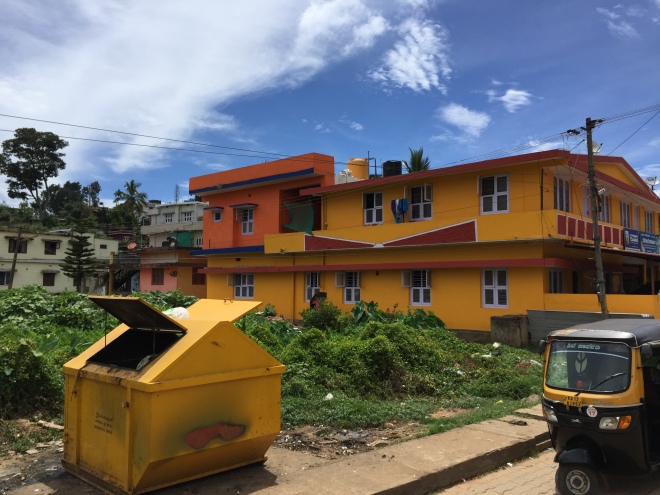 yes, you read that title correctly. allow me to explain…

this last weekend, i took off to coorg with a friend for a few days of rest and relaxation. a full review of my trip will be coming soon, but in the meantime i’d love to share a hilarious story from my return journey.

of all my visits to coorg, this was the first time i travelled by bus rather than in a car. alejandra and i took a ksrtc bus to virajpet and then took a private bus from there to the kabbinakad junction, which is where both honey valley and chingaara pick up their guests. the ride from virajpet to kabbinakad was uneventful, but my journey back to virajpet on monday morning was pretty entertaining.

for one, the bus was pretty crowded even when i boarded. it was going to virajpet and then on to gonikoppal, and there hadn’t been a bus in over half and hour, so everyone was cramming onto ours. all the seats were taken, and the conductor was ushering people in as far as they could go to keep room for new passengers.

i managed to stake a small claim to one tiny spot and remained there for most of the trip, contorting around whenever someone standing behind me was getting off the bus. the aisles on these buses are very narrow, with two seats on one side and three on the other, so there’s not a lot of space for maneuvering.

i kept myself entertained by eavesdropping on conversations and staring out the windows until i felt something on my hand. i was holding on to a pole next to one of the bench seats, and suddenly the elderly woman two people in front of me had leaned back on the pole and lowered her arm so that my hand was stuck inside her armpit. on top of which, the girl directly in front of me shifted as well, bending my elbow at a weird angle. add to that the fact that i was practically in the lap of the girl sitting at the end of the seat, and you can imagine what kind of a scene i made.

so there i was, with my arm bent unnaturally and my hand caught in someone’s armpit, unable to move or adjust myself or even communicate to the old woman that i was a little uncomfortable having my hand enclosed by her armpit [thank goodness she was wearing a blouse and wasn’t going sleeveless!]. she seemed completely unperturbed at the situation, and so i had no choice but to grin and bear it for about 20 minutes until some space opened up and we were all able to straighten up and spread out a bit.

i really wanted to take a photo to accurately capture what was happening, but as one hand was completely out of commission, i needed the other to actually hold on to something and balance myself, because the domino effect of falling in one of those buses would be pretty bad.

so i did the only thing i could do. i chuckled to myself, continued singing along with the music on the radio, and enjoyed the last views of the forest.

3 thoughts on “tales from the bus: the day i got my hand caught in an old woman’s armpit, and other fun adventures on the local bus in coorg.”