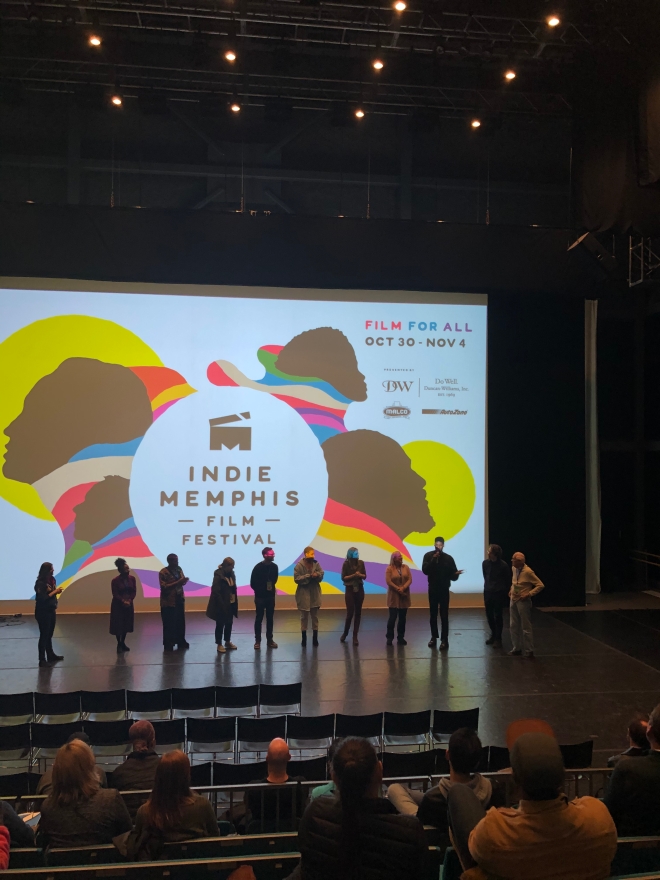 this year, as soon as i saw the dates for the festival, i blocked off my entire weekend. i bought my pass as soon as they went on sale – with that extra discount, thank you very much – and impatiently waited for the schedule to be released. i selected films and then selected others and then changed my entire schedule, all while lamenting that i couldn’t be in three or four places at once.

in the end i made it to 6 events from friday to monday, and below are my highlights.

indie memphis is making a concerted effort to support filmmakers of color and to provide them opportunities to shoot films in memphis, and this was the second year of the black creators forum pitch rally. 7 filmmaking teams pitched the films they want to make to a panel of judges and an audience of supporters with the hopes of winning a $10,000 prize. the caveat is that they must film in memphis; this brings money back into the city and also usually results in memphians being hired as cast, crew, producers, and sound designers.

i love a good feature-length film, but the hometowner doc shorts competition is one of my favorites to attend at film fest. hands down my favorites of the night were where we fall short, highlighting how difficult it is to get a record expunged in tennessee, and st nick, about local high school senior nick london’s battle with leukemia and his use of music and poetry to get him through, but i enjoyed all of them.

i especially love that after the films screen the filmmakers participate in a q&a so you can hear directly from them about what inspired them to make their particular film. this year we were also lucky enough to have nick – of st nick – participate as well, and i loved hearing his perspective of seeing his story come to life on the screen.

portrait of a lady on fire.

when i first read the synopsis for this movie, a french film about a painter who falls for the woman whose wedding portrait she is commissioned to paint, i was torn. it sounded interesting, but at over 2 hours long i had my doubts about whether it would hold my attention. and honestly, whether or not i wanted to read subtitles for that long.

and then on friday night i saw a trailer for it, and i was floored, so i decided to switch up my saturday afternoon schedule and go see this instead. and i am so glad i did. it is a slow burn for sure, but it is a beautifully made film.

i didn’t know much about this film until alex mentioned it to me, but as soon as i read the synopsis – a chinese grandmother spends an evening at a casino and finds herself wrapped up in a chinatown gang conflict – i was hooked. at times lighthearted and at times serious, this film ran the gamut. the acting was superb, and my favorite scenes were ones with very little dialogue where you had to focus on the characters’ expressions. definitely check it out if you get the chance.

this one was a lot of fun. lil’ buck is a hometown hero, a memphian who made it big as only a memphian could: as a jooker. jookin’ is a dance style unique to memphis, and lil’ buck is the most well-known jooker. you’ve seen him dancing in itunes ads and alongside yo-yo ma, and this documentary – seven years in the making – chronicles his rise from local fame to worldwide. there are a lot of iconic local places included, and there are a number of international locations as well. it’s so nice to have a local celebrity you can authentically support, and i hope that once the film is released in a larger capacity we will be able to show it to our students; i think they would love it.

i don’t even know where to start with this one. i just read the book in early october, devouring bryan stevenson’s story in barely a week, and i was beyond excited when i heard it was being made into a movie. and with my favorite, michael b. jordan, in the lead role to boot. and then, to top it off, about a week after i finished the book, indie memphis announced the closing film for the festival, and it was none other than just mercy. talk about all the stars aligning on this one.

it’s not often i rave about books-turned-into-movies, but this was one of the best ones i’ve seen. parts were adapted to speed up the narrative, and they had to focus on one case as opposed to the dozens chronicled in the book and the hundreds – or thousands – more not mentioned, but i think they did a fabulous job. the acting was superb, the cinematography and music were spot-on, and i cried all the tears. it’s been a long time since a movie stirred me up like this one did, and you could near people stifling sniffles all throughout the theater. huge props to indie memphis for getting this as the closing film, and if i’m recovered enough emotionally by the time christmas rolls around i’ll go see it again with corrinne. it was incredible.

and even with the opportunity to catch these six awesome events, there were countless others that i missed. movies, shorts, documentaries, artist talks…you name it, they had it, and i wanted to see it. i know it’s impossible to get to everything, and i very much also needed the downtime, but i love this weekend for the opportunity it provides to experience so many incredible events.

i already have next year’s festival dates marked on my calendar so i can enjoy all of it all over again.