unlike january last year that lasted a million days, january 2020 went by in a snap. i realized last week that i actually didn’t work a full five day week in the month of january, which i am quite proud of and hope to replicate for as long as i can. below are all the antics i got up to in january.

maggie came to visit! / ladies’ night drinks and a movie / benihana dinner to celebrate christina’s engagement / charlie and the chocolate factory at the orpheum / long weekend in cleveland with chrystal / puppy weekend with jack / bollywood day with chris and jessi / closed out the month with a flight to cancún

rising strong: how the ability to reset transforms the way we live, love, parent, and lead by brené brown. i closed out 2018 with brown’s daring greatly, so it somehow seemed fitting to begin 2020 with rising strong, her book about leaning in to vulnerability to rise back up after falling. she splits rising strong into three parts – the reckoning, the rumble, and the revolution – and shares stories of people, including herself, who have used these steps to overcome a failure or setback. brown somehow has a knack for saying exactly what i need to hear, and this was no different; there were so many small things she said that i am working to implement in my own life.

all god’s children need traveling shoes by maya angelou. one of my reading goals for this year is to finish maya angelou’s autobiographical series, so i got that challenge underway with the fifth book in the series last month. it picks up just after the accident that injured maya’s son guy as he was about to enter university in ghana and follows her resettling in ghana for a year. angelou is such a prolific storyteller that i often get so caught up in the story that i forget it was her life, and then she will mention spending time with malcolm x or meeting muhammad ali and i suddenly remember that she lived this. i can’t believe i only have one book to go in the series, and i’m looking forward to reading it in the coming months.

what i talk about when i talk about running by haruki murakami. vishnu first mentioned this book to me back in 2016, and i grabbed a copy from kat when she moved last year. a collection of essays that murakami wrote while training for the new york city marathon, this gives so much insight into what he thinks about while he is running and how running has come to play such a pivotal role in his life. i am not nearly the runner murakami is, but i related to so many things he mentioned in the book.

currently reading: reading malcolm gladwell’s outliers along with kat, lauren, alex, and jeremy so we can discuss it when we are all together in new york in march.

i was beyond excited when i learned that greta gerwig was putting her own spin on little women, and it lived up to and surpassed my expectations. saoirse ronan as jo march is very much the mood i am trying to cultivate in 2020.

january was the month i rewatched psych. i tend to go through the series about once a year, and each time i do i love it even more. it’s such a smart, funny show, and with the exception of a handful of episodes i never get sick of it. james roday and dulé hill are absolutely brilliant as shawn and gus, and i love having this on in the background as i am cooking or straightening up my room. it never gets old.

chris and jessi told me they wanted to watch a bollywood movie, so i introduced them to dilwale dulhania le jayenge. i hadn’t watched it all the way through in probably 5 years, and it was so fun to watch it with them. would love to make this a regular tradition.

with the west wing weekly podcast wrapping up i watched the final two episodes of the series in commemoration. they’re such great episodes, and i surprised myself with how emotional i got watching them. might be time for a full rewatch.

ashley abroad’s suggestions on where to travel this year based on your enneagram type. i’ll see my fellow twos in ecuador.

lizzo took time off from her australian tour to volunteer at a foodbank where she packed food for those impacted by the fires.

a look at some of the racial incidents that have been happening at the university of wisconsin-madison.

because dating isn’t difficult enough, now we have to deal with paperclipping. ugh.

black moms are at higher risk when giving birth than white moms, even when they’re in the same hospital. this is ridiculous.

which democratic nominee most closely aligns with your beliefs? i got andrew yang, which did not overly surprise me.

eileen fisher’s employee’s own 40% of her fashion empire.

10 books about race to read instead of asking people of color to do your emotional labor for you.

my best girl maggie just started a new job with pbs’ american portrait and it is all super cool and you should check it out.

great read about the benefits of teens helping senior citizens with technology.

how to raise gracious children. i don’t have kids myself but really liked this.

here’s to a wonderful february for us all!

note: the amazon links are affiliate links, meaning that if you purchase through them i will receive a small commission at no extra cost to you. 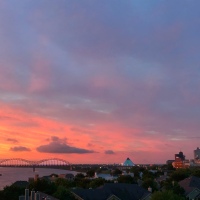