apparently december was my month for the romance novels…

the ex talk by rachel lynn solomon. this one wasn’t super believable, but it was cute and quick to read and i appreciate how diverse the characters were. i also think the ending could have been a little tighter, but ultimately it was fine. but what i did like was finally having a book where the female love interest was older than the male; you don’t see that often, and i appreciated it.

under currents by nora roberts. i’m going to be really blunt: the first quarter of this book was fantastic, and then the rest of it was really bad. if the first part had been expanded, i would have been perfectly happy for that to be the entire book. instead, it was drawn out, the characters were kind of boring, the villains were extremely obvious, the love story was very bland, and it took 300 pages to get to the conclusion we all knew was coming.

the singles table by sara desai. after the disappointment of the marriage game, this one reminded me why i like sara desai. yes a lot of it was predictable, but i liked both of the leads and was cheering them on. i’m intrigued to see if she continues writing more books in this series or shifts to new characters, because layla and daisy from the first two were only mentioned in passing but it felt like she might have been setting up parvathi to be the lead in a future book. either way, i’ll keep reading.

it ends with us by colleen hoover. there was a lot to this book, and my feelings on it are a little complicated. it deals a lot with domestic abuse, which is something i thankfully don’t have firsthand experience of, so i can’t speak to how it is portrayed in the book. the main thing i’ll say is that i didn’t like the main male lead, and so i never invested in the central relationship. ultimately i’m glad i finished it, but it’s not one i’ll reread in the future.

written in the stars by alexandra bellefleur. i read this one with maggie and molly for our romancey book club. there’s a lot of internal monologue that could have been cut down and i found one character’s transition from being standoffish to suddenly being lovey-dovey a bit unbelievable, but overall i enjoyed elle and darcy’s story. i have the second book in my libby queue so i’ll be reading it in the next week or so.

i was their american dream by malaka gharib. i have had this on my wish list for a few years and found a copy at open books in chicago. this graphic novel depicting gharib’s experience growing up as a filipino-egyptian-american and straddling all her varying identities and cultures was a quick and quite delightful read. she touches on the different connotations of the ‘what are you’ question and how timing and context matter when asking or being asked that. she talks about her parents’ different religious backgrounds and how she navigated her own relationship with religion. i loved following her story and will read anything else she publishes in the future.

not like the movies by kerry winfrey. this was my other open books selection, and i finished it in a day. it’s a pretty easy, fast-paced read and doesn’t take a lot of time or effort to get through. i admittedly didn’t love chloe’s character [she got a little too ‘woe is me’ at times], but i liked nick and enjoyed the general flow of the book. apparently it’s the second in a series, but i felt like i was fine not having read the first one.

mostly i watched holiday movies! my favorites are:

and i also randomly decided to rewatch criminal minds, so i am verrrrrry slowly making my way through that. it’s 15 seasons long [yes, you read that correctly] and i have never really rewatched many of the episodes, so i am taking my time with it. available to stream on netflix

the best things i listened to.

i always love the year-end episodes. it’s so interesting to listen back on all the things that happened over the year.

can tech save the literal world? (with jamie margolin) [how to citizen with baratunde]. listen to the youth, because they are the only ones who can save us.

‘hoosiers’ with bill simmons and ryen russillo [the rewatchables, november 25]. ‘hoosiers’ is one of my all-time favorite sports movies, so i was always going to love this episode.

tia williams [second life, november 29]. i loved listening to williams recount her many careers and how they have inspired her writing. her novel seven days in june was one of my favorite books of 2021.

workers of the world, stay home! [vox conversations, november 29.] anne helen petersen and charlie warzel talk about their new book exploring how the pandemic has disrupted how we work and how we still need to change how we approach work.

best of: how blue cities became so outrageously unaffordable [the ezra klein show, november 30]. this is a long one, but it’s so good. december’s choice for “if you only listen to one, listen to this one”.

ambition: how to achieve success on your own terms [the next big idea, december 2]. shellye archambeau talks about her drive to become one of the first african-american female ceos in the united states. great listen.

how to be a kinder, more caring neighbor [life kit, december 3]. a look at how we can take lessons from daniel tiger’s neighborhood to connect with our neighbors and foster community.

big announcement [call your girlfriend, december 3]. you know, i have been preparing myself for this announcement for years, but it doesn’t make it any less bittersweet. aminatou and ann have been two of my favorite podcast hosts over the years, and i look forward to the remaining episodes and to continuing to follow their careers in the future. [ps ann’s newsletter is one of my favorites]

both things can be true [hidden brain, december 6]. what happens when we begin to realize most of life happens in the gray areas.

the epic of collier heights [99% invisible, december 7]. this was a fantastic episode about the effects of redlining and racial zoning and the neighborhoods that came out of that, with a specific focus on the collier heights neighborhood in atlanta.

how to talk about money with friends, from planning a hangout to splitting the bill [life kit, december 9]. as the friend who is usually on the lower end of the earning spectrum, i found this very helpful.

the sunday read: ‘how the real estate boom left black neighborhoods behind [the daily, december 12]. this article / episode focuses on the orange mound neighborhood of memphis, the first neighborhood in the country to be built by and for african-americans.

did that really happen this year? [it’s been a minute with sam sanders, december 17]. a great recap of news and pop culture happenings from the year…in quotes. fantastic listen.

the year in sound [the daily, december 23]. i always look forward to the daily’s year in sound episode. it’s amazing all the things that happen in one year.

best of 2021 [monocle 24: the urbanist, december 23]. snippets and recaps of some of the best stories on the urbanist over the year.

the holiday movie machine [it’s been a minute with sam sanders, december 23]. a delightful listen on the wild number of holiday movies that are made each year.

the best things i made.

this pressure cooker chickpea, red pepper, and tomato stew was so easy to make and came out so tasty. i added grated ginger and minced green chilies at the beginning and of course added all of my ground spices, and i love how it turned out. this recipe is from sarah digregorio who also gave us my favorite spicy black bean and sweet potato chili.

how immigrant parents say ‘i love you’. the one about asking after friends from 15 years ago is my father in a nutshell. new yorker via cup of jo

Treated myself to a 4-day getaway spent traipsing around Chicago with my mini-me and it was the best gift I could have given myself 💙
I am still processing a lot of feelings from this year’s Marathon Weekend, but this is a moment I want to hold on to for a long, long time — the excitement and pride my mother felt after getting her first 5k medal, at the age of 78, one year out from breaking her femur. Walking this race with her, and being able to share it with one of my best friends and one of my mother’s biggest fans was icing on the cake.
Had a fantastic weekend wandering Bentonville, eating all the food, checking out some art, and celebrating 10 years of best friendship (with a special appearance from Mark) | #veenontheroad #budabesties2k18
I’m almost finished with my blog post about my most recent New York visit, and I keep coming back to this photo. One of my best cousins and one of my best friends, who have themselves become great friends to one another. They bring so much joy and light to my life, and I loved this time we were able to spend together 💙
Continued the birthday celebrations last night at the Shell. Couldn’t have asked for better company or weather | #ilovememphis #choose901
Blurry birthday besties, because there’s no one else I’d rather spend this day with. I’m excited to see what this next trip around the sun brings for us both 💙
I am so grateful for these ladies, for this city, and for a weekend getaway to celebrate 30 years of Alex Middleton 💙
Look who is back to work today! I have learned so much from her these last 5.5 months about resilience and strength and determination, and I am so grateful that she is able to return to doing what she loves. Shoutout to surgeons and nurses and therapists and all the healthcare heroes who have helped along the way, and a special shoutout to her for being a badass | #mamaswami
I got everything unpacked and on the shelves and will now live with it for a few weeks to see how I feel. My initial thought is that I love it and will never leave this room again | #VeensCastle
Follow queen veen on the scene on WordPress.com 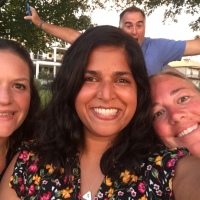