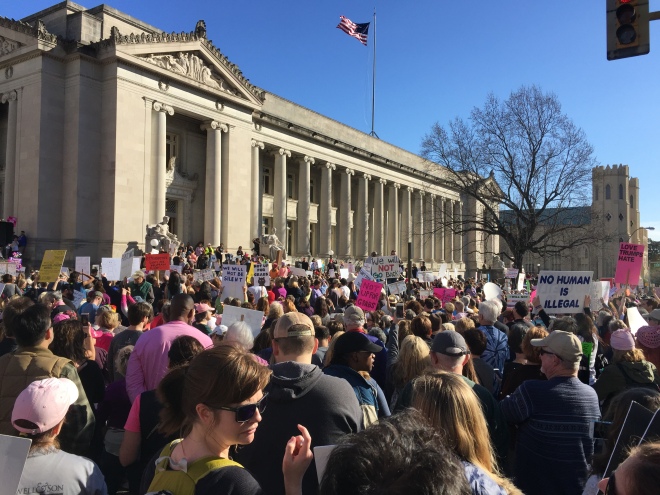 Posted on January 26, 2017 by veena Posted in lifeTagged personal

in the past i have shied away from political topics both on here and on my social media feeds. although i have always been a very proud democrat and have supported candidates with strong social justice platforms, my involvement has never gone beyond voting in elections. i had never contacted a congressperson, i had never participated in a march, and i have never been particularly active in vocalizing my opinions.

last november, my country overlooked the most qualified person to ever run for our highest office and instead elected a man whose campaign was based on shouting over everyone else and bullying his opponents into submission. i spent the day after the election in a daze, not quite ready to accept what had happened and unsure how it had come about. i spent most of the day on the verge of tears, because for the first time in my life i felt a real fear about what the future held for my country.

i also know i am lucky because of the many men and women who have come before me and who have fought for the rights i grew up with. i was born an american citizen because my parents were allowed to come here to further their education and establish their careers. i attended good schools because they worked hard to ensure i received a great education. i am able to vote because women fought for years to ensure i would have that ability. i am afforded control over my body because others were not, and they refused to be treated as second-class citizens.

but just because i am lucky, that doesn’t mean that i don’t know people who are not. that doesn’t mean i take it for granted. i recognize and admit all of the ways in which i am privileged, and i try my best to provide support for those who are not. i donate to organizations that offer support for disadvantaged citizens. i volunteer my time. i work for a nonprofit that works everyday to bring together youth from all backgrounds and encourage them to work together to find solutions for the problems in their communities. as brenna put it so succinctly, “our privilege is wasted if we do not use it for good.”

channeling that spirit, this past weekend, i marched.

being a part of the women’s march in memphis was one of the greatest honors of my life. i was so proud to walk amongst so many women, men, and children from all walks of life who came together to support equality and justice. we were not protesting anything; rather, we were showing solidarity in the belief that love really does trump hate.

for the most part, the marches around the world have received glowing reports. there were no incidents of violence and no arrests in connection with the marches, which happened in over 600 cities across the world. nearly everyone who showed up was there to support one another. scrolling through my facebook and instagram feeds on saturday made me so happy, and i am proud to know so many amazing people who participated across the country and around the world.

but it doesn’t end with one march.

if you are like me and still looking for ways to become more active, here are a few suggestions:

i refuse to accept that our country will regress, and i will work as hard as i can to ensure that does not happen. ours is a country of love and freedom and equality, and together we will be continue to build on that legacy.

will you join me?